Our mission – Our mission is to promote and encourage athletics as a viable means of recreation and sport for the benefit of athlete’s development in a healthy lifestyle. We support all members in the spirit of team, competition and in the achievement of personal goals for the development of the individual in a positive and enjoyable atmosphere.

Our value – Integrity in the way we operate and function, transparency and openness in everything we do and accountability for all our actions and decisions.

Rachid Chouhal (born February 14, 1975) is an international athlete and national champion in the 100m/200m/400m sprints, long/triple jumps and hammer throw, adding up to 30 times. His love and dedication to the sport has earned him ‘MAAA Athlete of the Year’ 7 times. 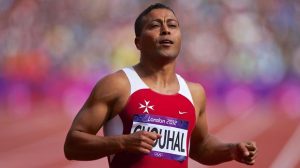 His recent achievements were at the European Championship Masters held in Ancona 2016, where he won the gold and silver medals in the long jump and 60m events respectively.

Gold medalist in the long jump in European Masters Championships 2022.

Rachid is a qualified track and field coach, personal trainer and massage therapist. He is also the national team coach for hurdles and coach at the National Sports School.

With 25 years of involvement in the sport, Antonella (born April 27, 1976) has gained great experience in Discus/Shot Put/Hammer field events, holding the women’s national records for all three events. 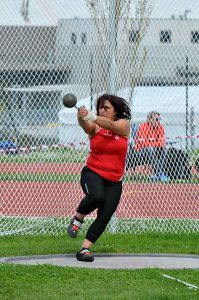 Antonella has represented Malta in several international meetings, including:

Her recent achievements were a silver medal under her belt in discus throw at Ancona European Championship Masters 2016, and 4th place in the weight throw at the same meet.

In 2021 broke various national records in masters category. She also competed in the European team championships held in Cyprus.

In 2022 won silver in the weight throw (with a PB and W45 NR) and bronze in the hammer throw at the European Masters Championships.

Antonella is a qualified track and field coach. She is also the national team coach in Discus and Hammer.

Groups are divided according to age categories. Cubs ages 6-10 years, followed by youths and cadets ages 11-15 years and 16 years up.  We do event specialisation that include sprinting, jumping, hurdling and throws.  Our coaches are highly qualified and have a good number of years of experience in track and field them as being athletes and also as coaches.  More details of our head coaches can be found http://rushathleticclub.com/about/.

We are the only club on the island that give individual attention when needed but also the only club that our head coaches are available 6 times a week from Monday to Saturday.  For us all athletes matter from the beginner to the Elite our club prides itself of our head coaches coaching and monitoring ALL athletes at all ages not only the Elite.  Besides the club monitors the progress of every athlete in each age group.  We inform our club members constantly of what is going on in the local Athletics scenario by email and also about upcoming competition and preparation.  We do individual training sessions and also online coaching when the need arises.